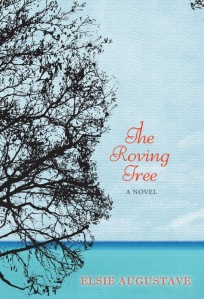 class privilege and color consciousness, and the search for cultural identity. The central character, Iris Odys, is the offspring of Hagathe, a Haitian maid, and a French-educated mulatto father, Brahami, who cares little about his child. Hagathe, who had always dreamed of a better life for her child, is presented with the perfect opportunity when Iris is five years old. Adopted by a white American couple, Iris is transported from her tiny remote Haitian village, Monn Neg, to an American suburb.

The Roving Tree illuminates how imperfectly assimilated adoptees struggle to remember their original voices and recapture their personal histories and cultural legacy. Set between two worlds—suburban America and Haiti under Papa Doc’s repressive regime—the novel offers a unique literary glimpse into the deeply entrenched class discrimination and political repression of Haiti during the Duvalier era, along with the subtle but nonetheless dangerous effects of American racism.

ELSIE AUGUSTAVE was born in Haiti and is a graduate of Middlebury College and Howard University with degrees in foreign language and literature. Her dedication to excellence in her field has been acknowledged through numerous international grants for continued studies allowing her to pursue her passion for culture in Senegal and France as a Fulbright Scholar. Among her many accomplishments, Augustave choreographed Elima Ngando, a major production for the prestigious National Dance Theater of Zaire, now the Democratic Republic of Congo. Augustave currently teaches French and Spanish at the renowned Stuyvesant High School in New York City, and is also a consultant for the College Board.

One thought on “The Roving Tree”