WASHINGTON, D.C., Sept. 21, 2012 – Nine returned Peace Corps volunteers (RPCVs) were presented with the Franklin H. Williams award on Thursday evening during a ceremony at Peace Corps Headquarters. The award honors ethnically diverse returned volunteers who exemplify a commitment to community service and Peace Corps’ third goal of promoting a better understanding of other peoples on the part of Americans. Award recipients were selected from each of the nine Peace Corps Regional Recruitment Offices nationwide.

“These individuals have demonstrated a commitment to public service that reflects what it truly means to be a Peace Corps volunteer,” said Peace Corps acting Director Carrie Hessler-Radelet. “They have made efforts to generate awareness around the Peace Corps, provided assistance to Peace Corps’ regional recruiting office staff and worked to promote Peace Corps’ third goal. Their dedication to service helps Americans across the country gain a greater understanding of the world.” 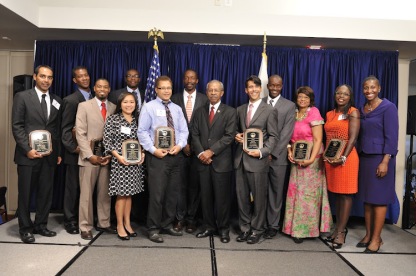 In addition, the Director’s Award was presented to Drs. Milton and Fred Ochieng’ for their outstanding work as co-founders of the Lwala Community Alliance in Lwala, Kenya. After the brothers lost both of their parents to AIDS, they juggled their medical school studies in the United States with networking and fundraising to build the village’s first health center in 2007. The Lwala Community Alliance now provides more than 22,000 patient visits each year. Historically, the Director’s Award is presented in conjunction with the Franklin H. Williams award.

ABOUT THE FRANKLIN H. WILLIAMS AWARD:

Peace Corps is proud to recognize Franklin H. Williams and pay tribute to his remarkable legacy. Franklin H. Williams was an early architect of the Peace Corps. He worked at the agency from its inception in 1961 to 1963 and helped Sargent Shriver—the first Peace Corps Director—promote the agency and its programs to the world. Ambassador Williams’ exceptional public service career included positions as the Peace Corps Regional Director for Africa, the U.S. representative to the United Nations Economic and Social Council, and the U.S. Ambassador to Ghana.

The Franklin H. Williams Award was conceived by New York Regional Office recruiter Leslie Jean-Pierre (Guinea, 1994-1996).  The award pays tribute to Franklin H. Williams, who worked alongside Sargent Shriver to establish the Peace Corps.  When Jean-Pierre learned of Williams early involvement from his manager, John Coyne, he recommend that the agency honor Williams’ vision that the Peace Corps reflect the diversity of America and his commitment to inclusiveness.  In 1999 Jean-Pierre coordinated the first Franklin H. Williams award ceremony, at the renown Schomburg Center for Research in Black Culture, in Harlem, New York .  Since that time, the ceremony has been held in 2001, 2002, 2003, 2005, 2006, 2008, 2010 and 2012.