GIFTS OF THE VILLAGE

GIFTS OF THE VILLAGE

Shelby floated across the stage with elegance and grace, just as the ladies of her family had 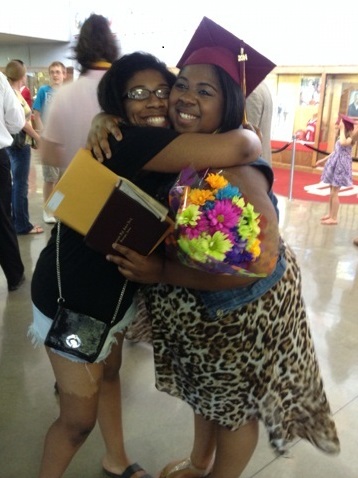 taught her.  She was absolutely gorgeous under normal circumstances, and this night, she was the most beautiful young woman in the world.  Shelby was finally graduating high school and I was so proud of her accomplishments and of the young woman she had become.  I began to think about all of the people who made this moment possible.  My daughter, of course, had done all the work and excelled in academics to earn the right to accept the diploma. It was, however, her family that had instilled in her the value system for her to even consider getting her diploma important. Not only her immediate family, but the extended “family” who maybe didn’t even know they were considered as such.   Sitting in the isles amongst all the other proud parents, I began to reflect on the old African proverb, “It takes a whole village to raise a child”.  “A whole village indeed!”  I thought, and a smile came to my face immediately.

I began to think about teachers in her life like Mrs. Birdyshaw (we called her Mrs. B).   While my girls were in elementary school, Mrs. B took a liking to our family and all my daughters, but recognized a lack of confidence in Shelby from very early on.  Other teachers would express their issues to me about Shelby’s excessive dependence in an exasperated tone. As if somehow, I could make Shelby stop being how she was so that they wouldn’t have to be annoyed by her excessive dependence on them.   Usually, this would take place at conferences, with Shelby right there, taking in all the negativity specifically about her.  However, Mrs. B would address me in private about some things that she might do, in partnership with what was being done at home, to empower Shelby with confidence, and in turn, lessen the undesirable behavior.  Mrs. B always spoke positivity over Shelby and encouraged her to be confidently independent.

I thought about Mr. Green, the elementary school assistant principal.  He was young, black, and successful and always made it a point to treat the girls of the school with the utmost respect.  He was also the example for the young boys, making sure they were treating the girls with respect as well.  Every morning he would stand outside to greet the students as they entered and open the doors for them.   He had a group of young male students that would stay after school with him and assist with walking young female students to their parents’ cars with an umbrella when it was raining.  Mr. Green was many of these young ladies’ first example of how a man should honor a woman.

I looked down the row at all the immediate family that had come with us to the graduation ceremony.  Shelby’s great grandmother sat poised next to me with a handkerchief placed delicately in her lap to cover her knees.   Gram was instrumental in teaching what she called “lady lessons” like keeping her knees together in a dress and how to walk in high heel shoes.

Right next to Gram was Shelby’s Auntie Kay.  Kay was relentless in telling Shelby the importance of knowing her worth and never missing an opportunity to advocate for herself.   Because Kay was a successful entrepreneur, she always showed, by example, the benefit of networking and being open to talking with any and every one.

I thought about many other examples of people who had come into my daughter’s life and made a valuable impact.   All these wonderful gifts ultimately brought my daughter to this point.   As I watched this beautiful young lady receive her diploma I understood that the true value of these lessons was that they were shared in love.    A new awareness of the village that the African proverb spoke of showered down over me.  Shelby was graduating and moving into the next stage of her life.  She now carried with her everything that was taught to her, and she knew the importance of lovingly sharing it with others.  At that moment   I knew the village proverb would shine on all those whom Shelby would bless with her gifts of the village.

Little Black Village promotes higher education, personal development, and international exposure for African American youth. Little Black Village is a dedicated to discussing and exploring ways of keeping our black youth from dropping out of high school and encouraging them in seeking higher education and living up to their fullest potential. Little Black Village is also committed to making a difference in the black community by encouraging its members to share their voices through social media outlets, lead by example by taking an active role in mentoring a black youth, connecting families to educational resources and actively taking part of community services in and out of our communities.
View all posts by Little Black Village »
« “What’s a Dollar More A Week.”
Be sure that you are registered to vote! »