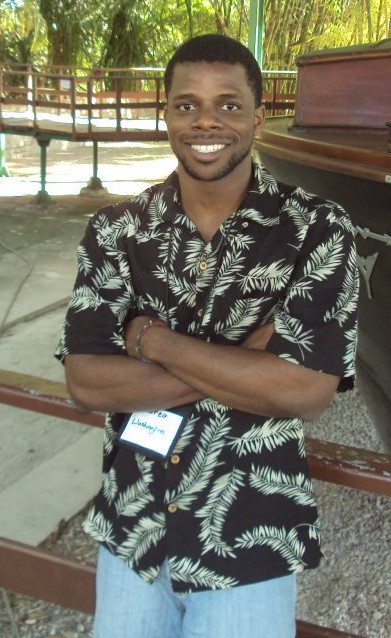 I kept trying to find something else to say to describe Mr. Timothy Washington … something more masculine! But all I keep coming up with is bruised but not broken.

When I sat down to interview Mr. Washington, I wasn’t exactly sure what I was in for. Our call got off to a slightly unconventional start with someone answering the phone and me hearing some noise that sounded like a bodily function. As I asked for Mr. Washington, it was as if he’d forgotten about our interview altogether. But what transpired over the next 45 minutes to an hour was nothing less than a story of tremendous dedication and resilience.

Mr. Washington was born to parents from Houston and Washington, D.C. Ironically, they met in the historic West End area and their life together began. Mr. Washington grew up with a total of 10 siblings, 8 of whom were in the same household and all young men. He recalls his brothers having a huge impact on his life, including influencing his decision to be on the band and eventually attend college.

Mr. Washington described his childhood as one with a lot of movement; he attended 4 elementary schools, 2 middle schools and 2 high schools. In the midst of all this movement, several things kept him grounded. As the grandson of a minister, Mr. Washington stated that church has always been a big part of his life and helped provide a foundation of hope for a better future.  He discovered books which gave him a different perspective on learning and the world, especially in the areas of science and electronics. With his foundation in the church, a newfound love of books, and his mom’s constant reminder to be a leader and not a follower, Mr. Washington was headed in the right direction. At that time he has no idea this direction would lead him to Morehouse College.

In the years to follow, as his brothers headed off to college and after yet relocation after losing almost everything in a house fire, Mr. Washington found himself at Benjamin E. Mays High School. It was at Mays that he would learn of Morehouse College for the first time. Timothy described studying the history of Mays, including details of B.E. Mays mentorship of Dr. Martin Luther King Jr., and his position among Black intellectuals of his time, and interfacing with several teachers who were graduates of Morehouse. From that moment forward, his eyes were set on becoming a Morehouse Man.

During the summers that followed Timothy participated in enrichment programs at Spelman and Morehouse consecutively. In spite of being accepted to Emory University and other colleges and universities, Mr. Washington chose Morehouse and began attending in the fall of 2004. During his first year, he was a commuter student, in the band and working. This combination did not work in his favor and Timothy ended up with a 1.4 GPA, subsequently having to sit out first semester of his second year and appeal to be readmitted the following spring.

Since that time, Mr. Washington has continued to pursue his degree at Morehouse. He has remained committed to his education and found various means to fund his education, including part time attendance, working, federal loans and grants This has all occurred while working the graveyard shift at UPS (since 2006) and having to provide room and board for himself less than two years after his initial dismissal from Morehouse.

In spite of taking a nontraditional – and greatly unanticipated route – Timothy seems to have never stopped looking at the end mark. Over the course his of time as a student at Morehouse, he has served as an Adam Scholar, volunteered with the Latin American Association and interned with the Georgia Hispanic Chamber of Commerce. As a result of these endeavors, he recently changed his major to Spanish, with a minor in History. He has also traveled to Cuba and the Dominican Republic, been a member of the National Honor Society, the National Beta Club and the Decathlon Team and taken AP courses.

As he now prepares for graduation, he is considering other options. At the top of the list … the United States Peace Corps. With aspirations of attending law school and opening a consulting firm with his brother who is currently studying in China, Mr. Washington sees Peace Corps as the perfect way to combine volunteerism and skill-building in the international arena. He is hoping to serve in a Spanish-speaking country and is excited about the next chapter of his life.

As previously stated, I wasn’t sure what I was in for after Mr. Washington and I got started. But after his interview, I knew that I’d encountered one of the most persistent young men I’ve ever met! We closed the interview on a much lighter note with some fun facts:

Little Black Village promotes higher education, personal development, and international exposure for African American youth. Little Black Village is a dedicated to discussing and exploring ways of keeping our black youth from dropping out of high school and encouraging them in seeking higher education and living up to their fullest potential. Little Black Village is also committed to making a difference in the black community by encouraging its members to share their voices through social media outlets, lead by example by taking an active role in mentoring a black youth, connecting families to educational resources and actively taking part of community services in and out of our communities.
View all posts by Little Black Village »
« Community Spotlight with Julius E. Coles
Word of the Day: Unity »

One thought on “Community Spotlight with Timothy Washington”